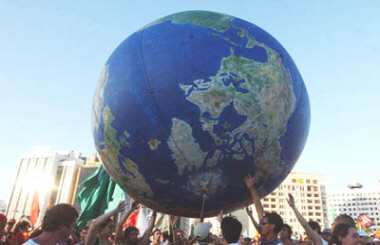 New art students are often advised to close off their pre-existing knowledge about the objects they are trying to draw, and instead focus on angles, spaces, lines, proportions and relationships. Development practitioners similarly need to close off their mental models about governance and development that are rooted in OECD experience.

Instead of prioritising reform of formal institutions, they should look at the structures, relationships, interests and incentives that underpin them. This does not mean rejecting the longer-term goal of helping poor countries to build inclusive, rules-based public authority. But in the short-to-medium term it may be more useful to explore whether relationship-based arrangements could offer a way to make progress.

This paper draws together findings from a five-year research programme by the Centre for the Future State. It explores in an open-minded way how elements of public authority are being created through complex processes of bargaining between state and society actors, and the interaction of formal and informal institutions. For example, a study in Egypt shows how informal relations between politicians and investors that build on common interests can compensate for weak formal property rights and contract enforcement, and boost investment in the short-tomedium term.

Studies of successful public sector reform in São Paulo suggest that formal participatory mechanisms may be less important as channels for policy influence than informal networks and relationships. Research in South Asia shows that informal village-level councils remain very influential, and can complement or undermine formal institutions. Studies in Ghana, Kenya and Ethiopia show how governments’ need for tax revenue has driven implicit or explicit bargaining with citizens, with the potential to enhance accountability.

Informal institutions and personalised relationships are usually seen as governance problems, but the research suggests that they can also be part of the solution. All the findings have implications for policymakers. For example, they should prioritise international action to improve financial regulation and constrain criminal activity, thus counteracting perverse incentives for political elites to perpetuate fragile states. Instead of focusing exclusively on improving the formal investment climate, they could do more to facilitate dialogue between politicians and investors and support collective action by business associations. Policymakers should be more alert to ways in which the design of public programmes influences opportunities and incentives for collective action to demand better services. Efforts to improve local governance need to take more account of informal village-level institutions. Tax reforms should prioritise equity, transparency and improved collection.

But the value of this research for policymakers does not reside only – or even primarily – in a list of policy messages. It makes a more important, broader point. Programmes to improve the investment climate, strengthen the rule of law, or fight corruption do not fail just for lack of ‘ownership’ or attention to politics. They fail because they make the wrong starting assumption: that progressive change consists in, and can be achieved through, strengthening formal, rules-based institutions that reflect a clear division between public and private spheres of life. The key to making progress in the short-tomedium term may not be direct external intervention to orchestrate and support rules-based reform, but more indirect strategies to shift or influence the incentives and interests of local actors.

With this in mind, the research suggests a list of questions that seem particularly salient in understanding causes of bad governance and identifying ways of supporting more constructive bargaining between public and private actors. They are likely to be relevant in a great variety of circumstances. What is shaping the interests of political elites? (Sources of revenue are likely to be critical.) What is shaping relations between politicians and investors, and might they have common interests in supporting productive investment? What might stimulate and sustain collective action by social groups to demand better services? What informal local institutions are at work, and how are they shaping development outcomes? Where does government get its revenue from, and how is that shaping its relationships with citizens?

This way of thinking about governance and development implies that donors need to reassess their own role in the process, and their traditional approaches to managing ‘donor-recipient’ relationships. But the first step is for them to change their mental models, and to stop viewing the world through an OECD lens. Without this they will not make the necessary investment in understanding local political dynamics, or make the (often uncomfortable) changes needed to their own organisation, values, practices and behaviour.